2nd Dimension Wiki
Register
Don't have an account?
Sign In
Advertisement
in: Characters, Phineas and Ferb: Across The Second Dimension 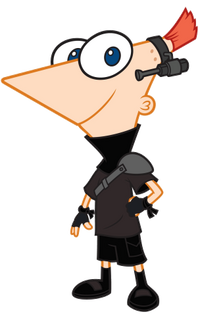 Phineas Flynn is a boy who lives in the Tri-State Area, and is the brother of Ferb Fletcher and Candace Flynn. Previously a cowardly boy who stayed in his house with his family and wore Dooferalls, Phineas joined The Resistance and plotted to override the rule of Heinz Doofenshmirtz. ("Phineas and Ferb The Movie: Across the 2nd Dimension")

When Phineas was a young child, the evil Heinz Doofenshmirtz took over his hometown, Danville, with an army of iron-fisted Normbots. As a result, he and his family usually stayed in their house, partically in their basement with his mother, in order to not get in trouble and get hurt. Therefore, Phineas grew up very concealed, and not being able to experience the outside world, to experience summer, and the true fun of being a kid. He became a conformist. As well, his pet platypus, Perry, left home on day and never returned.

This all changed when his 1st Dimension counterpart and his step-brother came to their dimension, and told them about the season that had been outlawed a long time ago. Phineas and his brother were very intrigued at this. The group went across the street to try to contact their neighbor, Isabella, only to be stopped by the Firestorm Girls. Once they realized that there was a a mistake, there was a mistake, and they were freed. Phineas found out that his sister, Candace was the leader of The Resistance, the organization that wanted to take down the man that had enslaved them.

Once the other Phineas and Ferb decided they wanted to save their Perry, who had been captured by Doofenshmirtz, Phineas was able to convince Candace to help them infiltrate Doof's lair and save them. Despite Candace's orders to stay in the headquarters, Phineas stowed away in the back of the mine carts the group was using to travel underground. Once Candace discovered this, she, wanting to protect her brothers, insisted that she take them home while the other Phineas, Ferb, and friends saved their pet. As she began to push the cart out, the group realized this was a trap. As they rushed to get away, Phineas kept his head down, as to not get blasted by the shooting Normbots. Candace separated the mine carts with her and her brothers from the rest, and allowed them to get caught, so she could keep Phineas safe.

Phineas was expected to have gone home, while Candace went back to rescue the other Phineas, Ferb, and friends, who were about to be fed to a Goozim. Phineas, and his brother, ended up meeting up with Jeremy Johnson who gave the two new clothes. Together, the trio was able to bypass the security in Doof's lair, and found the cell in which Candace was imprisoned, and saved her. After a heartwarming hug, the gang went to the 1st Dimension to assist the other Phineas and Ferb in battling Doofenshmirtz, who had come to their hometown in hopes of seizing that as well.

Once Phineas and the rest had arrived though, Doofenshmirtz had already been defeated. In the middle of thanking the other Phineas for what he had done, Perry the Platyborg, who had been turned into an evil cyborg by Doofenshmirtz, faced his previous owners, and dropped down on all fours, becoming a mindless pet once more. Phineas rushed to his pet, happy that he was no longer evil, and shared a hug with him. Phineas, and the rest of the Resistance, returned to the 2nd Dimension, ready for a new life without a dictator. ("Phineas and Ferb The Movie: Across the 2nd Dimension")

A couple of months afterward, Danville had returned to its former glory, looking very similar to the 1st Dimension Danville, and the school was being rebuilt, but currently, Phineas and his brother were in their 104 days of summer vacation. Phineas and Ferb, armed with a blowtorch and some peanut butter, begin to create the coolest rollercoaster ever. ("Phineas and Ferb The Video Game: Across the 2nd Dimension")