2nd Dimension Wiki
Register
Don't have an account?
Sign In
Advertisement
in: Merchandise, Phineas and Ferb: Across The Second Dimension

Phineas and Ferb: Across the 2nd Dimension (video game) 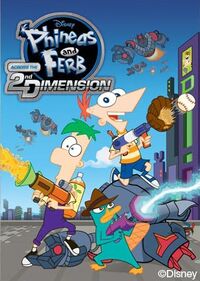 In the Wii and PlayStation 3 versions, players can control Phineas/Phineas-2, Ferb/Ferb-2, Agent P/Platyborg, Agent T (a character created specifically for the game) as well as 6 other characters. The player goes through numerous dimensions, notably a gelatin dimension, a balloon dimension, and a dimension resembling an old-timey 1928 cartoon world. Bosses include gelatin monsters, Norm Bots, and a giant robotic version of Doofenshmirtz. Two Mini Games are included that cost a coin to play, which you can earn five per a level. Playing this mini games give you tickets which you can use for bonuses, unlockables, and extra characters.

The DS version is very different from the other two Phineas and Ferb DS games. The gameplay contains more platforming and actions. Players can switch between playing as Phineas, Ferb, and Agent P at any time. With a code from the Wii version, players can also play as Agent T.

BURBANK, APRIL 4, 2011- Disney Interactive Studios today announced that Phineas and Ferb: Across the Second Dimension is currently in development for the Wii™ system, Nintendo DS™ family of handheld systems and PlayStation®3 computer entertainment systems. "Phineas and Ferb" has been the #1 animated TV series among Tweens 9-14 for the past three years and this lively new video game is inspired by the upcoming Disney Channel Original Movie inspired by the series. Fans can play as their favorite characters including Phineas, Ferb and Agent P as they journey through new dimensions filled with action-packed platforming, in a quest to battle the evil Dr. Doofenshmirtz. Phineas and Ferb: Across the Second Dimension the video game is slated for release in Summer 2011.

“We collaborated closely with Disney Interactive Studios’ video game development team to ensure that the video game captures the humor and style of our movie,” said Dan Povenmire, Emmy Award-winning Creator/Executive Producer, “Phineas and Ferb.” “The antics of the characters and the immersive new worlds of the video game extend the experience fans will encounter in Phineas and Ferb: Across the Second Dimension.”

The PlayStation®3 system and Wii system versions will allow fans to play as up to 10 characters. Players will have the option to work together in two-player cooperative modes while navigating through an old time 1928-style cartoon world, a lawn gnome land and a gelatin world. In a mission to save the world, players will journey through 25 exciting levels while overcoming obstacles. They also can upgrade cool new gadgets including the Carbonator, which fires carbonated orange soda that can melt enemies and Ninja Gloves, which allows players to stick to walls. Along the way, fans will collect cool items and unlock additional playable characters, including a new OWCA special agent created specifically for the video game. The PlayStation® 3 system version will also be the first time a Phineas and Ferb video game features PlayStation®Move motion controller compatible gameplay.

In the DS version of Phineas and Ferb: Across the Second Dimension, fans will play as Phineas, Ferb or Agent P. Players will jump, dodge, race and battle through five outrageous worlds featuring more than 30 levels. Players will work to earn gadget upgrades including a baseball launcher and Agent P’s favorite gadget – the grapple gun, while solving environmental puzzles in an effort to save Alternate Danville.

In addition to lending their voices to the Disney Channel Original Movie, several of the actors from the popular TV series will voice the Wii and PlayStation®3 system versions of the game including Vincent Martella as Phineas, Thomas Sangster as Ferb, Alyson Stoner as Isabella and show creators/executive producers Dan Povenmire as Dr. Doofenshmirtz and Jeff “Swampy” Marsh as Major Francis Monogram.

Published by Disney Interactive Studios, Phineas and Ferb: Across the Second Dimension will be released in summer 2011 and is expected to be rated E10+ by the ESRB.

In Phineas and Ferb: Across the Second Dimension, Phineas and Ferb finally discover that their pet platypus, Perry, is a secret agent who battles the forces of evil almost every day. With the help of their friends, the boys team up with Perry on an adventure through a parallel universe where they must ultimately thwart the disastrous plans of an even more evil Dr. Doofenshmirtz.

So far, the game has received good feedback compared to other licensed games by fans and critics.